Love the new features, my only comment is using a percentage for the artwork wrapping level makes no sense.

When I create my cover in InDesign, the bleed for the artwork wrap is always a fixed dimension as opposed to a dimension. The printer will say for example, add 20 mm, not 10%. Also if receiving the cover with bleed from a designer for me to create the 3D image, again, I will be told the artwork has bled a fixed amount.

Also, if I need to work it out, I can measure the distance in Acrobat. However, it’s never a percentage.

Any chance that this can be changed before release?

regarding the 2 options, I vote for 1 :-) and yes that would simplify.

Regarding the 5mm edge, you are of course talking about a printed cover (the example I sent you was rubbish for that, sorry).

This indeed is an excellent point and one that I didn’t think of! So normally the designer would send a file like this to the printer https://we.tl/t-OL7hY4bl1f which means there is enough “bleed” however, this brings us back to the problem of defining the size of the cover which is why I think when you drag the cover over onto the book, (not the dustjacket which is indeed simpler), we have to specify the size of the cover, the spine (as values). I don’t know whether Boxshot is able to read the crop values of a pdf and this doesn’t solve the issue of what happens if the cover is a jpg.

It maybe that option 2 is better in that regard for sorting this issue out because there are different options.

Sometimes the designer will want a quick mockup in Boxshot without the bleed in which case you would have to stretch the artwork for it to look good.

Sorry that I am creating more problems than solving!

Maybe it would help if I were to explain how I personally use the software. The cover designer knows the dimensions of the book (the spine width they will get from the printer) so that they can create the cover artwork (as a spread) for the client. They will know also know from the printer what size flaps the printer can print (the printer that my designer uses does 7cm).

Then I will get 2 pdfs from the designer – the cover pdf and the dustjacket pdf. I have uploaded an example of a series of 45 books that I need to generate 3D images from: https://we.tl/t-GKHGcF7tkt

Right now in the new version of the software, creating a 3D image from these 2 images is very time-consuming. I don’t mind working out the width of the spine and putting in a value or putting in the size of the cover as dimensions and then putting in the block-to-cover gap, but right now, it takes quite a long time to set this up. In fact, honestly, I wouldn’t even use the new book feature and continue with the old one – it’s just too slow (unless I’m missing something – which is more than possible!)

regarding full spread, then how about simply defining the value of the front cover or the spine. I know my cover is for a 23×15½ book so let me just type that in. Then the software can work out the spine.

In fact, maybe it’s smarter to start off like that. I type in 23×15½, then you know the book block should be 22×15, the spine will be whatever it is based on the image etc.

The problem with the crop each time is that I have to zoom out loads first and then it’s quite hard to measure using the UI. Seems like it would be easier to simply enter the values.

regarding bookmarks, okay, however, there is only one kind of bookmark in the book world. It’s a ribbon. Never seen anything but a ribbon in the several decades I have been in the industry. Not the most important feature however.

The edge radius doesn’t allow more than 3mm although I don’t actually know what an “edge radius” is.

Either way, 4–5mm difference is standard. In your book it looks like it’s maybe 1mm…

Dragging a pdf spread of the cover onto the book doesn’ṭ work. I have to drag it three times and crop each time. This is a shame. Then I can’t resize automatically. This does work for the dustjacket though :-) I miss the smart scaling of the old version.

There should be a value for the width of the flaps. (This was available on the old book.) Or even better smart scaling. I would like to see the following workflow:

I changed the headband to something more traditional by add an image of a headband, but it’s really hard to see. The various lighting make it almost invisible. Also the position isn’t quite right. You might have to add some materials for this to work well. 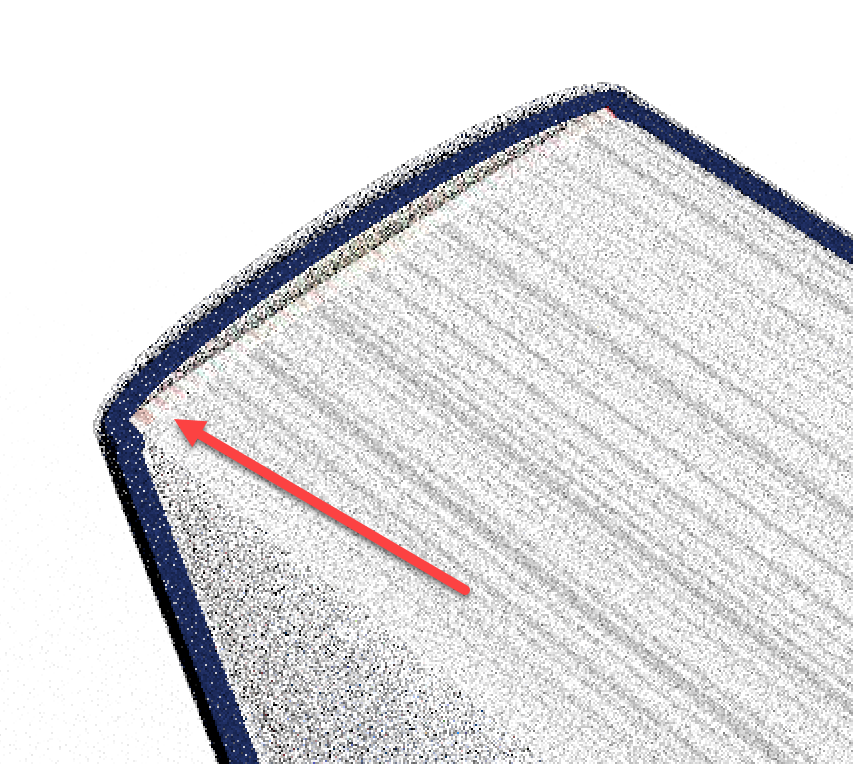 this was the image I used for the headband. I have a feeling that you don’t realise what the headband actually is.

Traditionally it had another purpose in terms of the binding process, but today it’s literally glued on to the top of the book to look pretty!

Here is a real book with a basic headband and two book marks. Note the vertical position of the headband. Also note how the cover is taller than the book block. 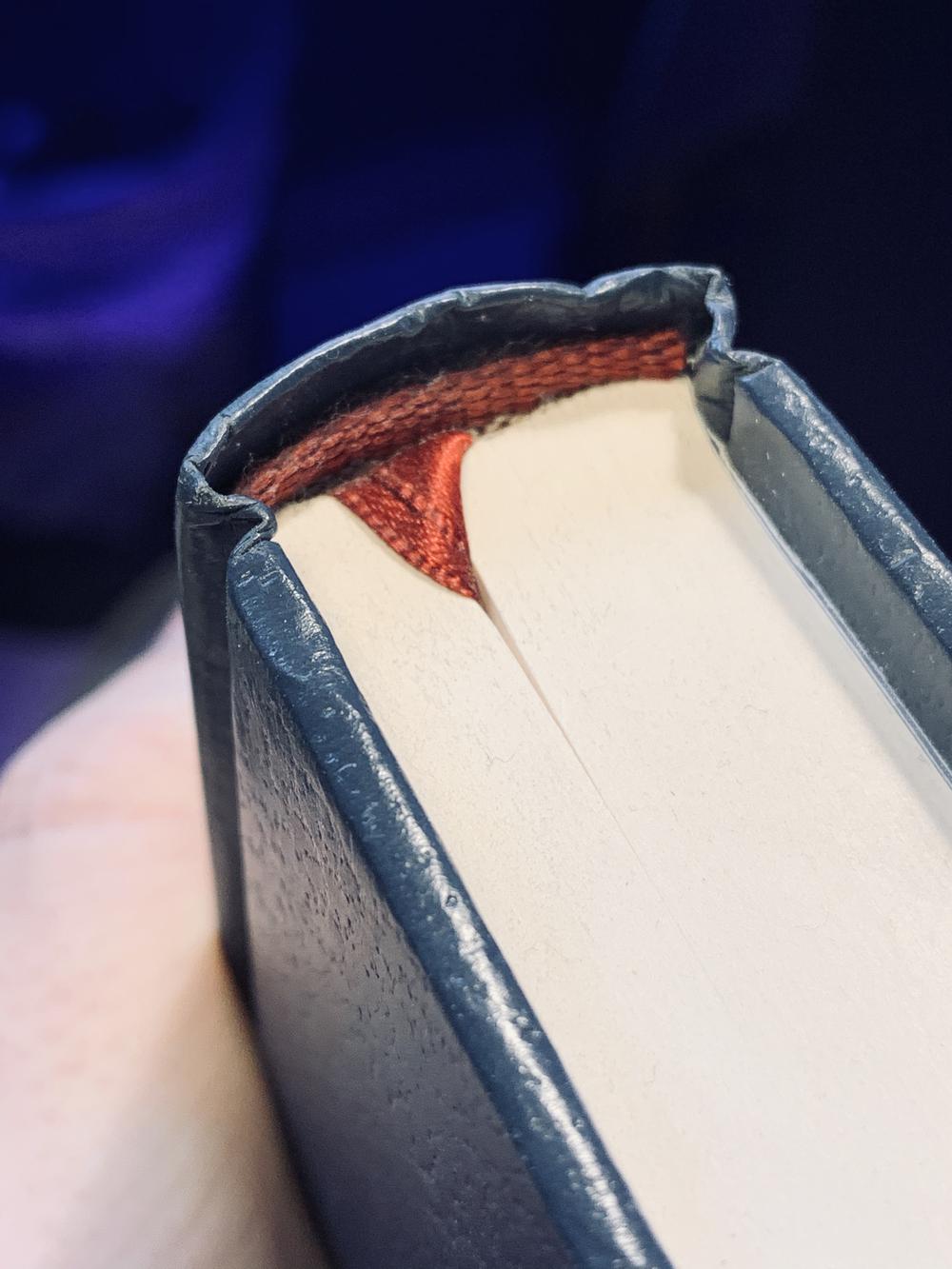 I didn’t see an option to configure the amount of extra space between the cover and the book block. In a hardback book, the cover is usually an extra 5mm on top, bottom and the outside. So if a book block is 22cm×15cm, then the cover will be 23cm high and 15.5cm wide. Each printer will have slightly different settings (I think 5mm is the most) depending on their equipment.

In the manual shape option, it would be nice if it was possible to select two points and drag them at the same time. Let’s say I want the curvature of the spine to be more (or less), it’s hard to select one point at a time and get it right. Although honestly, simply having the flat spine vs rounded spine option like before is probably more than enough customisation.

Just played for a few minutes. Love the new UI for the shape. Much simpler. Maybe make the shape fit to the space that it occupies when opening?

okay small comment for those of us using 4K displays at 150%… need to update your setup UI for hires. 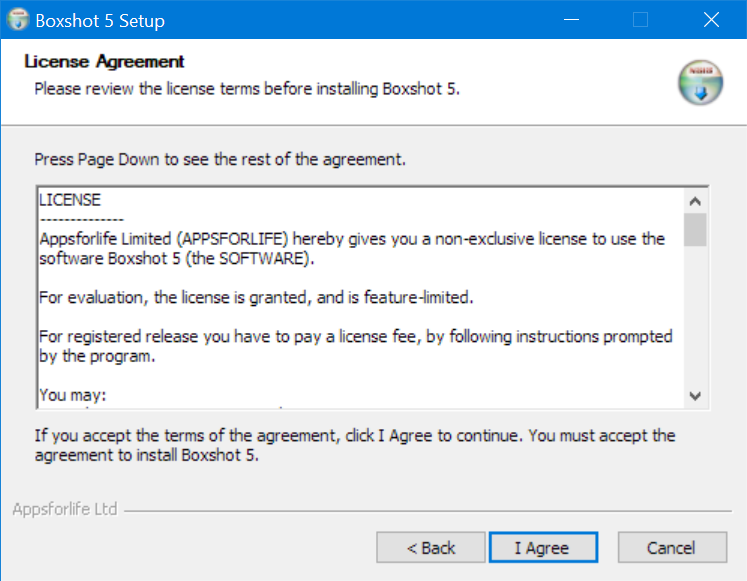 Okay, I will try this tomorrow. Thank you so much for taking the time to explain this to me.

so I played with the tutorials some more. I still don’t understand how to copy materials. If I have created a shape like above, apply all the different pages and then decide I want the roughness to be 100%, what do I drag where?

thank you for the link. Because I only do stuff with books (which is why this update is so incredibly exciting for me), the emphasis is only paper, but it’s still very useful to understand.

Not sure what you mean on how to do it more quickly by dragging and dropping. I still have to apply all the setting multiple times. With the exception of a colour insert of 16 pages like in the Queen book above, why would you want different settings for different pages? All pages in a book are made from the same paper.

I feel very strongly that the defaults for a book should be correct. So 100% roughness I think is correct.

I’m not sure I understand what “Refraction enabled” does here. 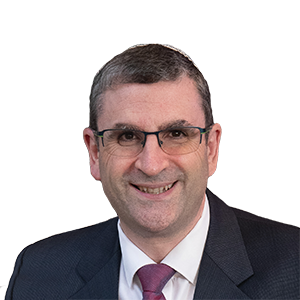